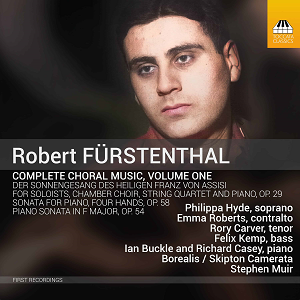 Like many Austrian Jews, Robert Fürstenthal (1920–2016) fled to the USA after the German invasion of his country in 1938. Music then became a link to his homeland: ‘When I compose, I am back in Vienna’. As an amateur composer, Fürstenthal preferred to work on a small scale, and his output of songs and chamber music is considerable. But he also wrote two sizable works for chamber choir, the first of which, in this series of two albums, is bookended by piano sonatas – all three works revealing that the tradition of Schubert and Brahms was alive in the California sun.