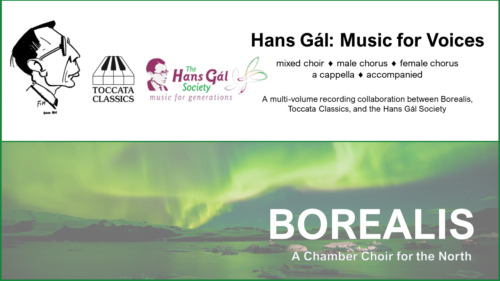 We are raising funds to complete the recording of vols 1 & 2 of Hans Gál: Music for Voices, a multi-volume project in collaboration with Toccata Classics and The Hans Gál Society

Please take a look at our Crowdfunder page (link above), and also check out our funding campaign video:

With your help, we aim to raise £7,000 by Friday 10th January 2020 to record vol.2 of the complete choral music of Austrian composer Hans Gál (1890–1987). The project is a collaboration between professional chamber choir Borealis, award-winning record label Toccata Classics, and the Hans Gál Society; special guest accompanist Ian Buckle will feature in several pieces.

We will also put the finishing touches to vol.1 of the Hans Gál series ready for its launch in the spring of 2020. Vol.2 will then be released in the Autumn of 2020.

Who was Hans Gál?

Born near Vienna in 1890, Hans Gál was one of the leading lights of Austro-German music in the early twentieth century, championed by such prominent figures as Wilhelm Furtwängler and Richard Strauss. Despite their profound musical difference, he maintained friendships with composers as diverse as Alban Berg, Anton von Webern and Erich Wolfgang Korngold. He co-founded Vienna’s Bach Society (1912) and his own Vienna Madrigal Society (1927; pictured above, left. Gál is seated front centre). In 1929 his hard work and early successes were rewarded with appointment to the Directorship of the Mainz Conservatory.

Within four years, however, the Gál family’s Jewish heritage would lead them to flee—first to Vienna, then to London, and eventually to Edinburgh in 1939. Aside from a five-month period of internment near Liverpool and on the Isle of Man as an ‘enemy alien’ in 1940, Gál remained in Edinburgh for the rest of his life, becoming a popular and highly respected member of the city’s musical circles, and a co-founder of the Edinburgh International Festival (1947).

Why is a recording needed?

Interest in Hans Gál’s music has grown rapidly over the past 20 years. A significant proportion of the composer’s instrumental music has now been recorded, notably Leon McCawley’s 3-disc complete piano works (2005), several interpretations of the four symphonies, and the Edinburgh Quartet’s recording of the string quartets (2011). One of Gál’s operas—Das Lied der Nacht [The Song of the Night], 1926)—is now available on CD, and he was even BBC Radio 3’s Composer of the Week in May 2014.

However, no CD recording (professional or otherwise) of Gál’s choral music is available, despite an output of well in excess of 100 partsongs, motets and madrigals (both a cappella and accompanied by piano or a variety of small ensembles), and five cantata-like works for choir and orchestra.

Borealis’s Music for Voices project will redress this situation. Between 2019 and 2025 we will make available to the world for the first time Hans Gál’s extraordinary treasure trove of music for choirs of many shapes and sizes.

From grand choruses with orchestra, through harmonically sumptuous works for 8-part chamber choir, to the intimacy of his settings for separate male and female choirs, Gál’s music for voices has something to suit all tastes. Darkly-hued passion rapidly gives way to satire of the most cutting (and often hilarious!) nature; this is music to be tasted, savoured, absorbed and loved.

About the project partners

Borealis (A Chamber Choir for the North) is an outstanding new professional chamber choir rapidly gaining a reputation for warm tone, vibrancy in performance, and adventurous choices of repertoire. Under the joint leadership of Bridget Budge (pictured right) and Steve Muir (below, left), the choir comprises a core of sixteen exceptional choral singers from across the north as far and wide as Manchester, Durham, Huddersfield, York, Sheffield, Halifax, Huddersfield, Wakefield, and Leeds.

We strive for a balance between young, emerging singers, and those with many years’ experience. Some of our members are just out of college, or have recently completed Genesis Sixteen, National Youth Choir, or similar fellowship schemes. Some have returned from Oxbridge or Cathedral choral scholarships in search of choral excellence near to home.

The older members include teachers from northern universities and specialist institutions like Chetham’s School or the RNCM. Several were choral scholars under Stephen Cleobury, Richard Marlow, and other prominent figures in recent choral history. Still active as first-rate choral singers, they bring a depth of tone and wealth of experience that complements and underpins the lighter agility of the upcoming generation, creating a uniquely rich and flexible blend.

Ian Buckle maintains a varied freelance career working as soloist, accompanist, chamber musician, orchestral pianist and teacher. He enjoys longstanding associations with the Royal Liverpool Philharmonic and the John Wilson Orchestra, and has appeared with them as soloist on numerous occasions. He has also played concertos with the Royal Philharmonic, Opera North, Sinfonia Viva and the Manchester Concert Orchestra.

Committed to contemporary music, he has been the pianist in Ensemble 10/10 since the group’s inception in 1997. He frequently collaborates with poets and readers, most recently Andrew Motion, Roger McGough and Deryn Rees-Jones. Ian is the artistic director and pianist of Pixels Ensemble and teaches piano at the Universities of Liverpool and Leeds.

“…one of the most fearlessly enterprising labels on earth” —Fanfare

Toccata Classics is dedicated to producing recordings of the huge amount of top-notch classical music that the concert halls and major record companies are ignoring.

Launched in 2005, Toccata now have over 400 albums in the catalogue; in the pipeline are recordings of music by (among many others) Alkan, Czerny, Fürstenthal, Graedener, Krenek, Moór, Raykhelson, Shebalin, Tartini, Telemann, Weinberg and, of course, Hans Gál!

As a relatively small record label, they punch well above their weight! However, the stark reality is that, like all but the very largest labels, they have to work in close partnership with their artists to raise the funds required to cover the cost of recording, editing, promoting, storing, and distributing the music that they are passionate about. Without wonderful people like you supporting outstanding ensembles like Borealis, labels such as Toccata would rapidly become unsustainable, and vast swathes of excellent music would probably never be heard again.

The journey on which Toccata Classics has embarked might never end, but it will be an exciting voyage of discovery nonetheless. We hope that you come on board for the ride with them and us, and support Hans Gál: Music for Voices.

The Hans Gál Society is a UK-based international charity dedicated to sharing information on Hans Gál’s life and works, and preserving the composer’s legacy for future generations. The society is thrilled to see Gál’s choral music finally emerge from the shadows, and is delighted to work with Borealis and Toccata Classics to see this project through to completion over the next five years. As well as promotion of the project to its membership, the society can help provide copies of Gál scores that are currently out of print, or have remained unpublished at all. The Music for Voicesproject will therefore be as comprehensive a collection of Gál’s choral music as is possible, embracing every extant work that the composer wrote for choir.

Why do we need your help?

Creating high-quality recordings is essential if Gál’s choral music is to be re-evaluated and enter the repertoire of choirs today. Recordings are the primary means of introducing unknown music to new audiences and potential future performers, who in turn will bring their own interpretations and help establish Gál as one of the finest choral composers of the twentieth century.

Recordings are also vital for Borealis as we enter our second year. Whilst bringing live performances to large audiences is at the heart of our activities, recordings will help raise our profile within the classical music industry, with the knock-on effect of enabling further recordings and live events.

But recording a professional ensemble is expensive! Ticket sales from concert performances, even with capacity audiences, can rarely cover the true cost of events; fundraising is therefore crucial to our future. Unfortunately, few arts funders support recordings (don’t worry: we’re approaching those that do!), making us value the generous support of friends like you all the more.

So, in order to bring Hans Gál’s glorious music to the 21st-century choral world, and take Borealis to the next phase of its development as an ensemble, we need your help now. £7,000 will cover the remaining cost of recording and producing vol.2 and finalising vol.1. Your donation will fund transport, expenses, and logistical costs; fees for our 17 singers, conductor, and pianist; production and editing costs; promotion (in print and online) of the Music for Voices series internationally; and piano tuning during the four-day recording period.

What rewards are we offering?

We have a great range of rewards! You can help us raise at least £7,000 by pledging as much or as little as you can.

If you simply want to make a donation you can pledge £10 and we’ll say a big ‘thank you’ in the programme of our next concert, and on the website. Or you may be interested in some of the other exciting things we’re offering: